I think this is a pretty standard banana pudding recipe, but I made Brian call my mother-in-law so I could make sure I had it right.  I’ve always just made it with plain banana pudding, but this way is so much better!  The picture isn’t very flattering because I didn’t have great lighting conditions, but I assure you it looked very yummy! 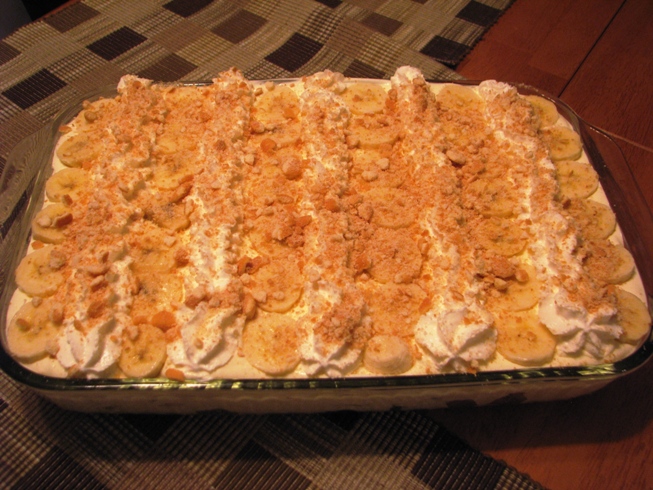 Directions:
Mix pudding packet and milk according to package directions.
Mix sour cream and Cool Whip into pudding (I use an electric hand mixer for this to make it nice and fluffy).
Layer bottom of pan or bowl (we used a 9×13 dish here with a double batch of pudding) with Nilla wafers.  Spoon a layer of pudding on top.  Add a layer of sliced bananas, then another layer of pudding, etc. until you’ve used up all the pudding.

In the picture above I got a little decorative with some canned Cool Whip, banana slices, and crushed Nilla Wafers, but that isn’t necessary. (It is fun though!)

Just copy and paste the text below to add to your site!